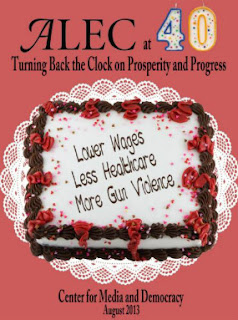 Outside, the people, who have been cut out of the legislative process by ALEC and big money donors, protested in the streets. (Photos here.

In its 40-year history, ALEC has done more to destroy the American Dream than any other group. According to a report by the Center for Media and Democracy, 466 ALEC bills were introduced in 2013, and 84 of them became law. Every state and the District of Columbia considered ALEC bills this year. Here are the highlights from their report: 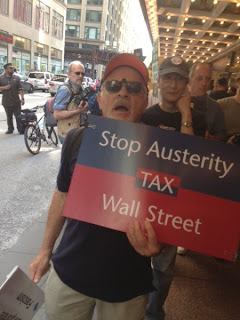 For more on the ALEC protest, check out the related links and watch street protesters– including union members and Progressive Democrats of America (PDA) members– in this video below.

PDA and ALEC: “You’re Not Welcome.”

ALEC at 40: Turning Back the Clock on Prosperity and Progress

For this report, which focuses on ALEC’s 2013 legislative agenda, the Center for Media and Democracy (CMD) researched five areas: 1) Voter ID and Stand Your Ground legislation, 2) wages and worker rights, 3) public education, 4) the environment, and 5) citizen access to the courts. Research continues on other areas of ALEC’s agenda. Key Findings:

Read the full report with charts of ALEC bills here.