Spotlight: The GOP Misunderstands the ‘War on Women’

The GOP Misunderstands the ‘War on Women’

>by Katrina vanden Heuvel | The Washington Post | Tuesday, 30 July 2013 19:11 |
You can’t say Republicans lack for chutzpah. The cynical right-wing message-men have come up with a new insult to our intelligence – and to millions of US women. As Buzzfeed reported Friday, Republicans are now spinning a series of scandals to try to prove the Democrats are the party with the real “War on Women.” That’s just silly, and they know it. 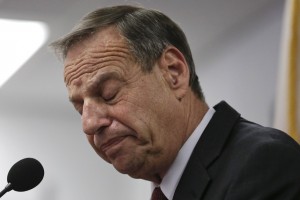 Needless to say, some current and former Democratic pols haven’t exactly covered themselves in gloryrecently. San Diego Mayor Bob Filner’s refusal to resign, despite an apparent pattern of repeated abuse, is particularly outrageous. But sexual indiscretion and sexual harassment (two types of scandal that shouldn’t be conflated) know no partisan affiliation. Remember Herman Cain, one-time GOP presidential frontrunner and accused serial sexual harasser? National Journal reported at the time that “scores of interviews with Iowa Republicans over the weekend turned up scant outrage” over the allegations. Some high-profile Republicans even questioned the concept of sexual harassment itself, with Rep. Steve King calling it “a terrible concept,” and Senator Rand Paul warning that some now “hesitate to tell a joke to a woman in the workplace…” The horrors!

Two months ago, Kristen Anderson, the former communications director for the Iowa Senate Republicans, announced she’d be filing a civil rights complaint after a firing she charged constituted retaliation for speaking up about a “sexually hostile work environment.” Anderson told the Des Moines Register she’d complained about men making comments about women’s bodies and sexual orientation, and that it cost her her job. Where’s the Republican outrage over that? Don’t hold your breath.

While Republicans highlight Democratic men’s scandals, there are just as many in their own ranks. (And it’s often the Republican ones – from David Vitter to Mark Sanford – who manage to stay in or return to office.) While they accuse Democrats of turning a blind eye to misbehavior, the truth is that leading Democrats have been strong and clear in condemning abuse. Nancy Pelos said Thursday: “The conduct of some of these people we are talking about here is reprehensible. It is so disrespectful of women.”

Sexual harassment is serious. It’s an issue women across America feel acutely. But fixing it is going to take more than politically-motivated crocodile tears from the Grand Old Party. Instead, women need a commitment to public policy that protects us from discrimination and harassment and supports and respects our ability to run our own lives. The reason Republicans are now trying to flip the “war on women” script is that they have no such commitment.

To the contrary, the GOP has shown nothing but disdain for the real needs of actual women. Consider what the party stands for: Allowing bosses and insurance companies to discriminate against women; forcing raped women to carry their rapist’s fetus; requiring insurance coverage for Viagra but not for the pill; defunding Planned Parenthood, Head Start, childcare, and services for domestic abuse victims; conscripting doctors to violate women with medically unnecessary (and thus punitive) procedures; and redefining rape so more rapists walk free. That’s an awful agenda, and women know it.

As Steve Benen noted Friday, when we say “War on Women,” “we’re talking less about Republican misdeeds towards specific individuals and more about a systemic issue of GOP policymakers pursuing a radical agenda that affects all American women.”

Indeed, hard-working Americans women are trying to make end meet, and Republicans are doing everything they can to make their lives harder. That’s what they want women to forget.